Major Transit Station Areas are lands within an approximate 500-800 metre radius of a transit station or stop, primarily along existing or planned transit corridors.

MTSAs are intended to be developed as high density, mixed-use, transit-supportive neighbourhoods that provide access to local amenities, jobs, housing, and recreation opportunities. 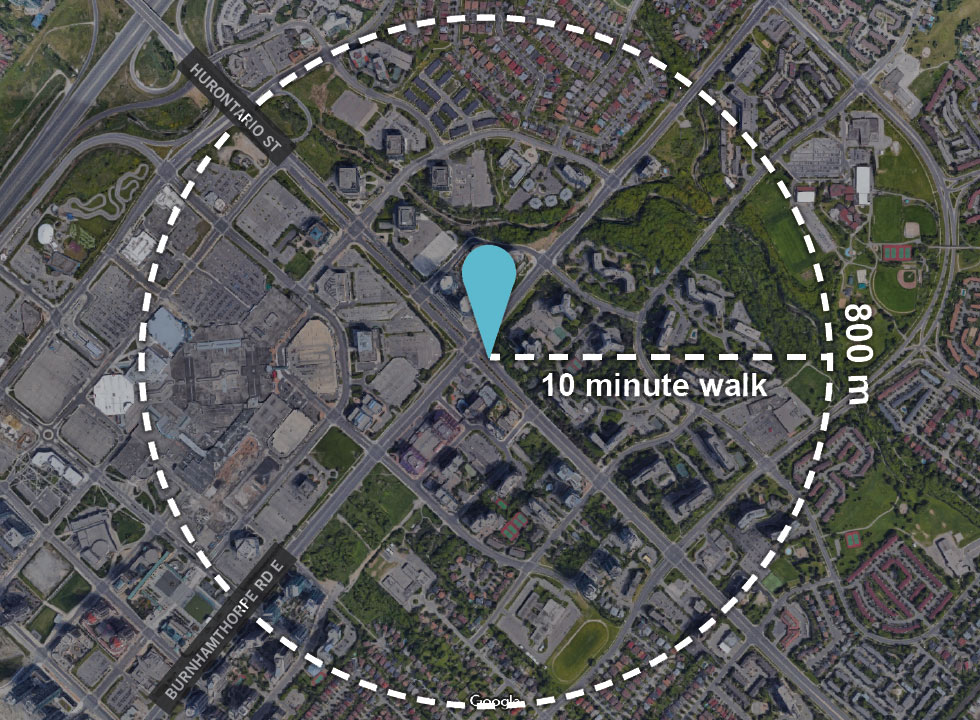 Why did the Region complete the study?

As part of the Peel 2051 Official Plan and Municipal Comprehensive Review, the Region developed a strategy and policies to guide how growth is accommodated within Major Transit Station Areas across the Region. This work was undertaken in collaboration with Brampton, Caledon, and Mississauga.

Updates on items related to the Major Transit Station Area focus area were provided to Regional Council and the Planning and Growth Management Committee (PGMC) throughout 2021.

These reports and presentations are provided for reference below:

All other presentations and reports to the Planning and Growth Management Committee related to Peel 2051 can be found on the Official Plan Review Reading Room webpage.

During fall 2021 statutory consultations, the Region received comments and requests for changes to the MTSA delineated boundaries, classifications, and minimum densities from agencies and the public. Staff have reviewed these requests and proposed changes to several MTSAs. Revisions were presented in January 2022 comparison maps and a comparison table, and in February 2022, additional updates were made to two MTSAs, ECWE-3 (name change to Multi-modal Transportation Hub) and KIT-1 (Malton GO delineation change). The MTSA supplementary information package provides additional information on alternative densities and key changes to MTSA delineations. For further information on the requests, staff responses, and detailed mapping and tables, please refer to the documents below:

In collaboration with local municipal staff, regional staff evaluated revising the MTSA policy framework for the following emerging corridors, as described in the October 21, 2021 Planning and Growth Management Committee Workshop presentation on Growth Management and MTSAs:

As part of open houses held in Summer 2021 for the overall Peel 2051 Municipal Comprehensive Review, display boards were prepared for each focus area, including Major Transit Station Areas. These display boards provide an overview of the MTSA study process, updated policy framework, and mapping.

The Province provided comments on an earlier copy of the draft MTSA Regional Official Plan Amendment. The comments include directions to further recognize Growth Plan Priority MTSAs, expand delineated boundaries, further justify where lower alternative densities are proposed, and to make other refinements. Regional staff considered these comments for future updates to the MTSA policy framework.

Changes to MTSA Classifications and Delineations

In consideration of the August 2021 update to the MTSA Study Phase 1B report, the MTSA policy framework presented two changes:

The changes were reflected as appropriate in the August 13, 2021 draft Regional Official Plan Consolidation Table 5.

An updated copy of the MTSA Study Phase 1B Report was prepared to address some corrections and new information on transit infrastructure and land use planning decisions. The revisions have informed the MTSA draft Official Plan policy framework of Summer 2021.

In Phase 1B of the study, each station area was reviewed through an integrated planning lens to develop a Regional classification of stations, establish minimum densities, and guide MTSA implementation planning to be undertaken by the local municipalities (i.e. official plan policy and zoning). Development and zoning capacity and infrastructure capacity cost analysis was used to determine proposed Regional Official Plan minimum densities for each MTSA.

As part of the June 25, 2020 Peel 2041 council report, an MTSA policy directions report was prepared to provide background information and initial directions based on Phase 1A of the MTSA study.

The policy directions report also outlines next steps in the Phase 1B of the MTSA study, which will prioritize MTSAs and incorporate broader considerations including local priorities, infrastructure assessments, and strategic opportunities.

The results of Phase 1B and the policy directions informed the new Region of Peel Official Plan that guides the development of MTSAs across the Region, delineating station area boundaries, and establishing minimum density targets.

As part of the Phase 1A work for the Regional Major Transit Station Area study, the potential MTSAs were reviewed through an analytical lens evaluation, sorted into typologies, and profiled with preliminary boundary delineations and existing densities. The Phase 1A report outlines this work and an emerging framework which informed the next phase in the study.

The draft profiles provide a snapshot of the current conditions of each station, including preliminary boundary delineations and existing densities. The profiles were intended to frame a discussion on how each station will be planned for in the future.

If you have any comments on the profiles or preliminary delineations, please contact us.

The Region of Peel held an Open house (PDF) on July 9, 2019 for the community to learn about the study. Attendees had the opportunity to review the location of potential MTSAs in the Region, speak to the study team, and participate in an interactive exercise about the factors that support successful transit-oriented communities.

From July 17th to July 31st, an online engagement survey and accessible form were open to those who could not attend the open house to provide their input. Comments gathered in person and online were reviewed and considered to inform the MTSA Study