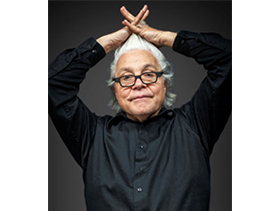 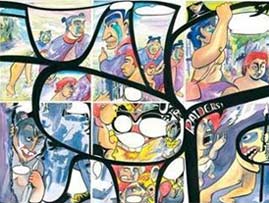 Brampton, ON (August 13, 2019) – Peel Art Gallery, Museum and Archives (PAMA) is pleased to welcome award-winning, British Columbia-based artist Michael Nicoll Yahgulanaas on Sunday, August 18 from 2 – 3 p.m. to discuss his epic graphic work, RED: A Haida Manga, currently on display in the exhibition For A Social Cause. This talk is included in the price of general admission. Pre-registration is required.

From: http://mny.ca/en/biography
Michael Nicoll Yahgulanaas is an award-winning visual contemporary artist, author and professional speaker. His work has been seen in public spaces, museums, galleries and private collections across the globe. Institutional collections include the British Museum, Metropolitan Museum of Art, Seattle Art Museum and Vancouver Art Gallery. His large sculptural works are part of the public art collection of the Vancouver International Airport, City of Vancouver, City of Kamloops and University of British Columbia. Yahgulanaas’s publications include national bestsellers Flight of the Hummingbird and RED, a Haida Manga. When not writing or producing art, Yahgulanaas pulls from his 20 years of political experience in the Council of the Haida Nation and travels the world speaking to businesses, institutions and communities about social justice, community building, communication and change management. His most recent talks include the American Museum of Natural History and TEDxVancouver.

His work RED: A Haida Manga on view now at PAMA was first manifested in 2008 as a large-scale, six-tiered band of 18 panels each, across a nearly three-and-a-half-meter-long composite of hand-painted watercolour and ink drawings. The drawings were reproduced in a scripted graphic novel of the same name in 2009.

The work follows the life of an orphaned young boy named Red and his sister Jaada who live in the peaceful village of Kiokaathli on a secluded island in the Pacific Ocean off the West Coast of British Columbia. Their idyllic existence is cut short when a band of raiders attack the village, abduct Jaada and successfully escape without a trace. Separated from his sister, Red grows up alone to become a leader of his community all the while consumed by rage and vengeance. When he unexpectedly stumbles upon the chance of rescuing Jaada, he will do anything and stop at nothing to bring her back home without thinking about the recourse of his action. In the process Red kills an innocent man and eventually ends his own life.

This action-packed tragedy combines traditional Pacific Northwest Coast Haida imagery and oral narrative with Manga (popular contemporary graphics found in Japanese comics and cartooning) to create a unique hybrid style that has come to define the work of its artist-author. Yahgulanaas’ distinct brand is an integrated culmination of his studies of the artistic methods of his ancestors and Asian influences including the teaching he received from Chinese brush painter Cai Ben Kwon. Learn more about this dynamic work on view now at PAMA.

PAMA is a place to explore and learn about Peel Region’s culture and heritage, as well as use conversation, questions and stories to help make new and fascinating connections to the surrounding community. Throughout the year, PAMA offers a variety of workshops and programs for all ages, families and adults. With so many different programs to choose from, PAMA has something for everyone. Operated by the Region of Peel, PAMA is located at 9 Wellington Street, East in Brampton. Visit pama.peelregion.ca to learn more.

The Region of Peel works with residents and partners to create a healthy, safe and connected Community for Life for approximately 1.5 million people and over 175,000 businesses in the cities of Brampton and Mississauga and the Town of Caledon. Peel's services touch the lives of residents every day. For more information about the Region of Peel, explore peelregion.ca and follow us on Twitter @regionofpeel and Instagram @peelregion.ca.