Wastewater from the collections system enters the treatment plant through the headworks. The headworks consists of mechanical screens, grit removal chambers and other associated equipment.

All wastewater flows through mechanical screens. These screens capture and remove materials such as rags, plastics, metals and wipes. The screened materials are washed and compacted before disposal.

The wastewater then flows through the grit removal chambers, where a vortex-type flow pattern makes grit settle to the bottom of the tank. Every so often, grit slurry pumps remove accumulated grit, which has excess water removed before disposal.

Primary clarifiers are large tanks. They slow the flow to allow readily settleable solids to sink to the bottom of the tank.

A sludge layer forms at the bottom of the tanks where sludge collection equipment sweeps it to the collection hoppers. Skimmers remove the surface scum layer, which consists of floating materials. The sludge and scum are then pumped to the biosolids facility for processing.

Aeration tanks are large tanks where dense populations of microorganisms consume both particles and dissolved substances.

Biomass is a mass or clump of organic matter that is used as a fuel. The combined biomass of the aeration tank is called mixed liquor. The mixed liquor flows by gravity to the secondary clarifiers.

Secondary clarifiers are large tanks. They also slow the flow to allow readily settleable solids to sink to the bottom of the tank.

These tanks provide dormant conditions to settle the biomass out from the water.

The treated secondary effluent is then disinfected.

Phosphorous removal in the treatment process is enhanced using ferrous chloride. Ferrous chloride helps phosphorous in the wastewater settle to the bottom of the clarifiers. 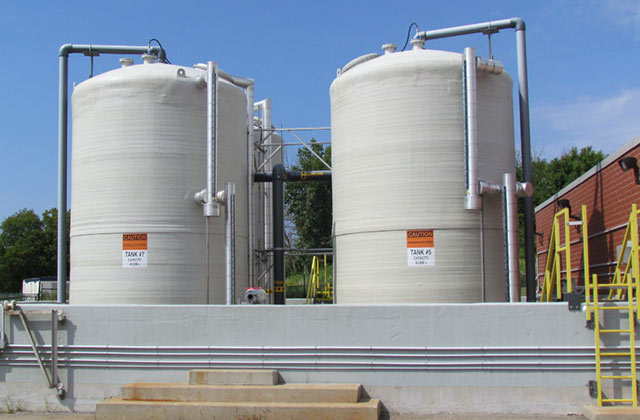 Secondary effluent is disinfected to destroy disease-causing organisms prior to the release of final effluent into the environment.

Chlorination using sodium hypochlorite is used for disinfection at the G.E. Booth and Clarkson WWTP's.

Low-level chlorine can have toxic effects on aquatic environments, so chlorination is followed by decholorination using sodium bisulphite. Sodium hypochlorite and sodium bisulphite are added before and mid-way along the outfall pipe, respectively. This allows a sufficient retention time for the corresponding chemical reactions.

Final effluent is discharged to Lake Ontario through each plant's outfall pipes, which extend over a kilometer from shore. Effluent is released via a series of ports that diffuse the water over a large area.

Thickening and dewatering processes are used to reduce the liquid content of sludge and biosolids for various reasons, including increasing treatment capacity, reducing haulage volume and providing a material suitable for incineration.

Dewatering provides a higher level of liquids removal. The liquids these processes remove are returned to the liquids treatment stream. Polymers are used to increase thickening and dewatering efficiency.

Anaerobic digestion is a sludge stabilization process that happens in a heated, mixed, oxygen-free tank.

The anerobic digestion process receives both primary sludge and thickened waste-activated sludge. Sludge is mixed and heated in the digesters to stay between 35°C – 37°C for proper bacteria activity.

Sludge heating happens by continually recirculating the sludge through external shell and tube heat exchangers. At the Clarkson WWTP, biogas that is produced in this process is captured and used to generate heat and electricity by cogeneration unit (cogen).

Stabilized sludge is referred to as biosolids.

At the Clarkson WWTP, digester gas that is generated in the anaerobic digesters is collected and used as fuel for the cogeneration unit and the hot water boilers.

Cogen is an effective way of providing non-conventional renewable energy to generate electricity to the internal high voltage grid and generate heat to keep the digestion tanks warm.

Gas boosters maintain the digester gas supply to the storage gas bubble for the cogen and the boilers. Excess gas that isn't used at the boiler unit is flared.

Combustion air is fed into the windbox at the base of the incinerator. Dewatered biosolids and, if necessary, supplementary fuel (fuel oil or natural gas) is pumped into the fluidized sand bed.

Water is evaporated, and most of the solids combustion is processed within the sand bed. Final combustion happens above the bed in the freeboard section with exhaust gases exiting between 700°C – 900°C.

Exhaust air is cleaned and cooled prior to release into the atmosphere. These emissions are constantly checked by a continuous emissions monitoring system (CEMS).

The ash slurry produced from the incineration process is pumped to ash lagoons for onsite storage. 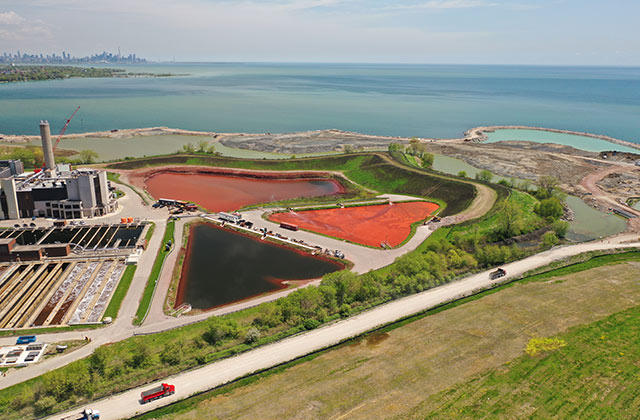