Anti-icing is the application of salt brine to roads and bridges to improve road safety. 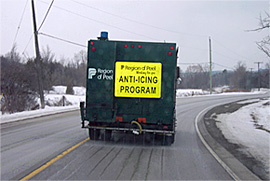 If there is no precipitation, the salt brine can stay active on the road for several days.

Salt brine is produced by Region of Peel staff.

Where do we use the anti-icing solution?

We apply liquid salt brine on roads, bridges, higher curves and bends in the road. It reduces the build-up of black ice, frost and packed snow. We put this liquid on our bridges first because bridges freeze faster than roads.

When do we use anti-icing on our roads?

Anti-icing normally takes place between October and April with most of the liquid applied in the months of November and December. It works best at moderate temperatures. Once temperatures become very cold, use of brine is not as effective.

How is the solution made?

Brine is inexpensive to make, can be made in-house, and is created using the correct concentration of water and salt. It works well in moderate temperatures, and one brine tank on a truck holds 7000 litres.